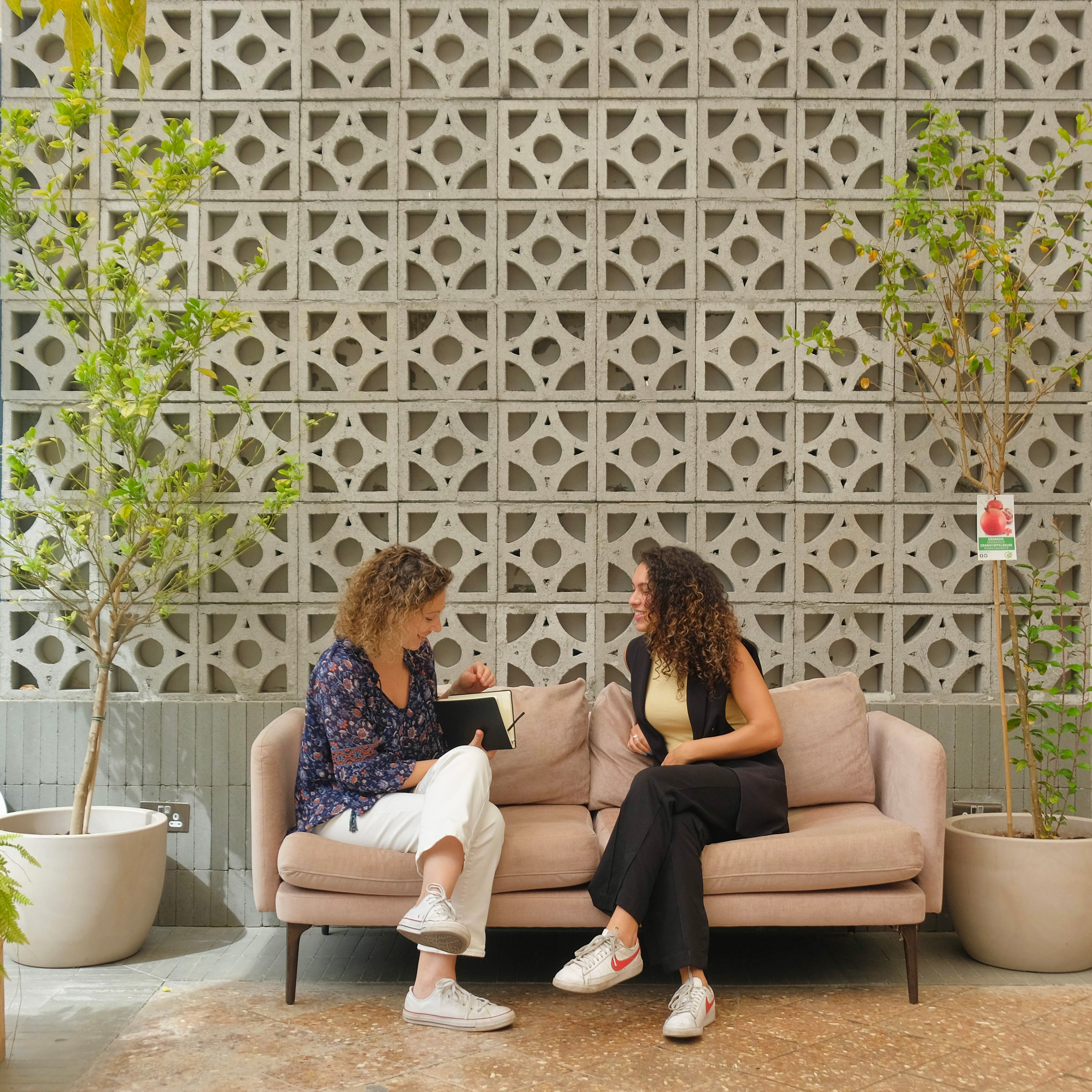 en.v is a culturally diverse and community driven NGO established in 2008. Their work focuses on connecting different social groups through training programs and events that foster compassion and unity in community. Elisa is the managing director at en.v and her colleague Layan is the programs manager and design lead.

Elisa: I kind of always knew that I was going to work in the nonprofit sector. I think I knew since I was 13 years old that it’s the kind of work I wanted to do. I have a political science degree and a masters in gender studies. I started organizing with community groups in Canada when I was doing my bachelors there and I continued to do so when I moved to the UK for my masters. I worked at an NGO there for several years. I then spent some time in India working in a women’s NGO and from there I moved to Spain to join a non-profit organization focused on development projects in Asia and Africa. Shortly after I moved to Kuwait I joined en.v and I’ve been working there for 12 years now.

Layan: I have a bit of a different story. I graduated from AUK with an international relations degree and a minor in English literature. I didn’t know what I wanted to do at all after graduatingand I think I didn’t know what was possible. Around that time en.v was organizing a community event for about 60 different civil society groups and my cousin who was working in civil society, called me and told me she was coming to pick me up for the event. I remember telling her “no, I’m not ready” but she insisted. She knew my interests so it was clear to her that I would benefit from it. I went in and was shocked at the fact that there were so many people in Kuwait who were curious about stepping into shared spaces and processes together, in having discussions, and doing the kind of community and social work I was always interested in but didn’t think was possible here. It opened up a whole new world for me. I joined en.v soon after and have been learning and growing alongside the work ever since.

Elisa: When en.v was first established it focused primarily on sustainability education and programming. Since then, we’ve been moving more towards community building and organizing that promotes more inclusive and participatory approaches across society.

Layan: People usually ask us to specify whichsocial issues we address as an NGO, but I think the value of our work stems from our intersectional approach—we don’t focus on one issue at a time, but instead, we work together with people and groups to think critically about the dynamics, stories and ideas that make up our understanding of ourselves and one another on a more systemic level. Our work is rooted in building relationships and in reflection and listening.

Elisa: Through these processes, we envision and enable a society that is more compassionate and inclusive towards all its members and one that allows people to play an active role in making it a better place for everyone. The work is primarily taking place in Kuwait but we are also doing more and more work across the region.

Layan: A few years ago, as Elisa mentioned, we moved from capacity building and supporting the professionalization of civil society organizations to a whole new direction, towardscommunity building. In 2018 we decided to experimented with a new process and format, to encourage people to connect more meaningfully to themselves and one another. It consisted of a3-day festival that offered space for learning, dialogue, and artistic expression. We co-designed the experience with 45 of our partners over the span of 8 months and worked with some of our local partners – like Sandigan Kuwait, Dialogue X, Human Line Organization and different student groups – to co-facilitate discussions, trainings, and even theater groups and music gardens. We tried all kinds of formats and ways, especially using the arts, to get people to start addressing some of the underlying divisions that make up our society. It was an incredible experience.

Elisa: It was mind blowing. Everything we were doing was out of the box and new. The whole process was about internal self-reflection, role playing, unmaking of systems of thinking. We weren’t sure if people were going to show up and what their response was going to be. The first day of the festival we started with a lot of nerves and then as we saw people come and start to engage, we started getting a sense of how ready people were to take off their masks and connect with each other on an authentic level. The audience and the participants were really representative of what Kuwait actually looks like in terms of age groups, backgrounds, nationalities, everything. It offered a space for people – who wouldn’t normally engage with each other – to have meaningful conversations and engage in ways that tap into our collectivity and humanity.