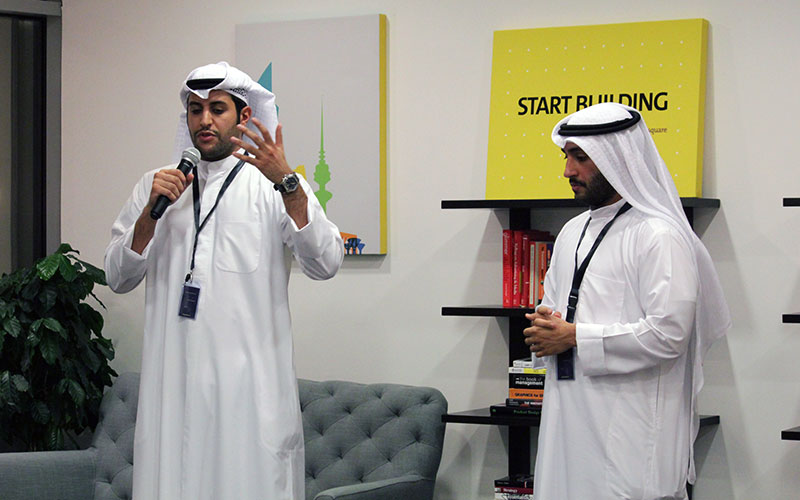 Inspired by one of the most well-established “passion districts” in the U.S., Kuwait’s Almakan has definitely proven itself to be a place to see and be seen. Having successfully married the various appeals of a “passion district”, this venue is an art gallery, studio, restaurant, and cafe all under one roof.

UM Alums, Alhassan and Alnashmi were intrigued and impressed with Miami’s homegrown passion district called Wynnewood, which went from housing a number of neglected warehouses to playing prominent host to a hip art scene and catering to a vibrant community.

What made Wynnewood come alive were the transformations that took place over one warehouse after another, as one was turned into a playground of sorts, another became an art gallery, while others still morphed into restaurants and cafes and just like that the whole town was given new life and a new purpose.

Upon relocating back to Kuwait, Bader Alhassan found himself gravitating towards the budding art scene as he continued to attend several art events held throughout the year. And it was with that gravitational pull that his passion for art began to grow and he started thinking about recreating his own Wynnewood right here in Kuwait.

There was an unaddressed vacuum when it came to the art scene and Alhassan wanted to fill that vacuum by introducing a place that would become a hub for creative artists and art lovers alike. It would be a place where artists could communicate their passion and potential and where those interested in art could enjoy some unique and engaging artwork. The participation, interaction, and general exchange that would take place in this hub would, in turn, contribute to the overall elevation and development of the art scene throughout Kuwait.

This was when the young Architect teamed up with Alnashmi, Alnefisi, and Alhassan, all of whom had aligned visions, to create Almakan (literally: “the place”). They devised a floor plan that was comprised of four sections, each promoting art in a different form; the restaurant would be the engine that generates the profits and revenues needed to run and sustain the project. This unique layout ensured that Almakan offered an unprecedented experience to its guests in Kuwait.

Finding the perfect venue for this artistic hub proved to be a challenge, as it took six months to find a spot suited for this venture. Once the location was settled and agreed upon, there emerged the challenge of getting all the necessary permits and licences for each of the restaurant, the cafe, and the art gallery. In the end, the founders had to establish two separate companies in order to be able to attain all the required licensing.

The biggest challenge by far was attending to all the bureaucratic paperwork and procedures, which demonstrated the strength of their will and the extent of their flexibility. The next challenge was getting the restaurant, and the establishment as a whole, up and running. This taught them the importance of backup plans; always have a Plan B because Plan A rarely works, it also taught them the importance of having passion for what you do and having the right people on your team.

Once those challenges were addressed, the team decided to resort to social media and word-of-mouth as their marketing strategy. They agreed that there would be no outsourcing and figured that the more risk involved the greater the opportunity would be. Whatsmore, they see their client base as sacred but not infallible; meaning that, while they listen intently to customer feedback, greatly value it, and try to work with it, they always make sure that the concept that launched Almakan in the first place remains intact and very much alive.

They are a studious and meticulous group of individuals who make sure that they do their homework before taking any step. And, by their own assessment, they believe that they have yet to reach their goal but are willing to attest to their success in moving in the direction that they have set for themselves and Almakan. Their future plans include include an expansion driven by a new concept.

This new hub for the art community is one to watch as it displays intriguing promise within its art-embracing walls.